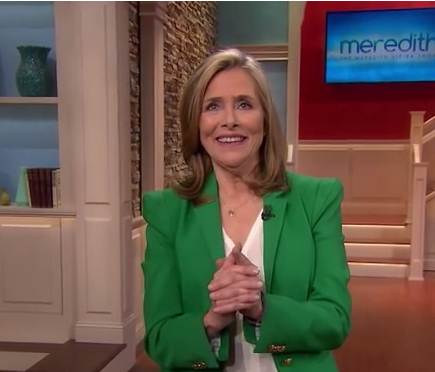 She has been a host for the Today show, The View, Who Wants to Be a Millionaire and her own daytime talk show. Meredith Vieira is one of the most versatile TV personalities there is, and now, she is taking her on-air talents to a new game show, 25 Words or Less, set to debut Aug. 6 on select Fox TV Stations.

Fox TV Stations evp of programming and development Stephen Brown announced that Viera will host the half-hour limited series, which is a collaboration from Lisa Kudrow, Dan Bucatinsky, Mary McCormack, Michael Morris, showrunner John Quinn and Bruce Sterten, the latter being the creator of the 25 Words or Less and Taboo board games.

“The most popular game shows are often defined by their iconic hosts. That’s why we are so excited to have Meredith host 25 Words or Less,” Brown said in a statement.” As host of Who Wants to Be a Millionaire, Meredith became the longest-standing female game show host in history. In everything she does, she brings humor, intelligence and an overall sense of fun that we think will make this a great game show series.”

Hosted and produced by Vieira, 25 Words or Less pits two teams comprised of both celebrities and civilians against each other in a fast-paced word game with a top prize of $10,000. In the beginning rounds of the game, after a frenzied bidding session, one team member provides clues to two partners to help them guess a list of five words using fewer than 25 clue words. In the final round, the contestant who has earned the most points has 60 seconds to get his partners to guess 10 words using only 25 words or less.

Vieira added, “I’m so excited to host this game. It’s fun, fast and forces contestants to choose their words carefully. Add in celebrities, you’ve got a party!”

Most recently, Vieira served as co-host of PBS and BBC’s Royal Wedding Watch and is currently hosting the PBS series The Great American Read. In addition to the above-mentioned programs, early in her career, Viera spent more than a decade at CBS News, including working as an editor on the news magazines 60 Minutes and West 57th.