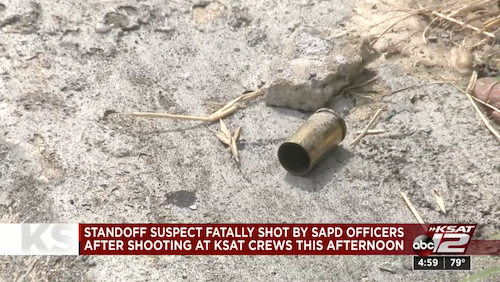 A man who shot at a San Antonio news crew and his own family was killed by police after a standoff that lasted several hours Monday.

KSAT reporter Dillon Collier and photographer Joshua Saunders were at the scene of a suspicious house fire when the man, who is believed to be a member of the family affected by the fire, came out of the house with two handguns and opened fire.

The ABC affiliate says the man took several shots at Collier and Saunders but missed. He allegedly hit an SUV with his family inside.

Collier posted a picture of the man on Twitter and said the suspect “fired a handgun at our news crew and his own family around 11 a.m.” The man then barricaded himself in a house a block away.

“The suspect allegedly saw the officers through the screen door of the house and shot at them,” said San Antonio Police Chief William McManus. “Five officers returned fire, killing the shooter.”

Here’s the suspect accused of firing a handgun at our news crew and his own family around 11 a.m. Fired at a red SUV while holding two handguns. Then fired more as all of us scattered. He’s now barricaded in a home a block away. Stand-off about to enter its fourth hour #KSATnews pic.twitter.com/8bSuEL4LJt