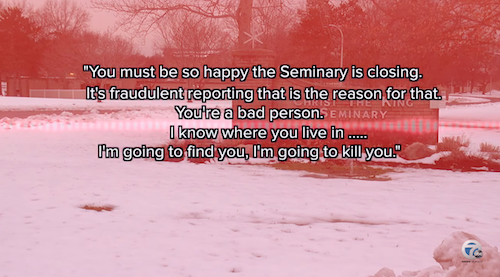 A former professor has been sentenced to a year in prison for cyberstalking former WKBW reporter Charlie Specht.

Paul Lubienecki, 63, is slated to spend 12 months in prison after previously pleading guilty to stalking in U.S. District Court. Lubienecki, who was an adjunct professor at the now-closed Christ the King Seminary, was found to have left Specht threatening messages for six months while Specht was investigating a seminary in the Diocese of Buffalo for alleged abuse and corruption last year.

In one message, Specht was told: “You destroyed the Diocese of Buffalo and Bishop Malone. I’m gonna destroy your career.” (Malone left the church in 2019.) Other messages contained personal information, including where Specht lived and references to his family members.

Following a message that contained a death threat, Specht and his family were given private security and moved to an undisclosed location.

“We were shocked, surprised and scared,” Specht told WKBW when Lubienecki was arrested in 2020. “I got the feeling that this one person—whoever they were—had spent months harassing me about really personal things, and was now threatening violence. I wanted my family to be safe. We put our trust in law enforcement to find out who was doing this.”

Specht left the Buffalo station in July and now works as an investigative reporter for The Buffalo News.