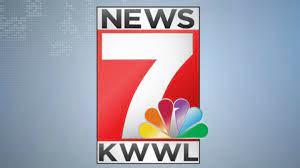 Steve Wayne Wilcox was charged with one count of third-degree harassment in connection with a legal ad he took out in a local paper.

Wilcox was previously arrested in December after allegedly sending Facebook messages, mail and packages to Schmitt after police told him to stop contacting her.

This latest arrest is related to the previous one. The ad Wilcox allegedly bought was looking for witnesses who might have seen him speaking to the anchor live on the air in December, and mentioned the arrest and upcoming trial.