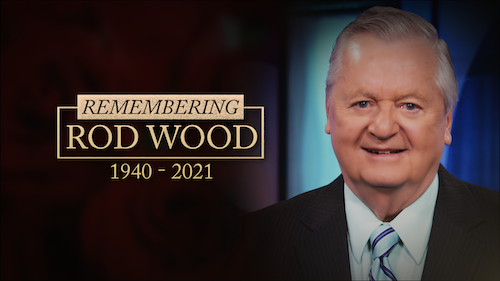 He started working at WIXT (now WSYR) in 1976 as news anchor and retired in November 2020. He spent over 55 years covering the news in central New York.

Wood started working in radio after leaving the Army in 1963. He first went to work at WOLF Radio in Syracuse before moving on to WNDR Radio in 1964. Three years later, he started working at WHEN, where he became the radio station’s morning news anchor and then news director in 1974. He also served as weekend anchor on WHEN.

At his retirement in 2020, Wood was honored on the floor of the U.S. House of Representatives by Congressman John Katko and was awarded an honorary degree from Onondaga Community College. The station newsroom was also named in Rod’s honor.

Below is a statement from Wood’s family:

We are beyond sad to report that our beloved father Rod passed away this past Sunday evening.

He was surrounded by his children when God called him home. On the day prior, he had turned 81.

Just a few short weeks ago, he was diagnosed with an inoperable and aggressive cancer. He fought very hard but was unable to overcome it.

A native son, he loved Syracuse and Central New York above all other places. Nothing brought him more joy than serving and delivering the news to our community. His pride in Syracuse and its rich history, past and present, was unceasing. If you were a Central New Yorker, you had a friend in Rod Wood. And we were fortunate to call him ‘Dad’.

Thank you for all the love and support you showed him from the beginning of his career in 1963.

We will miss him beyond measure!