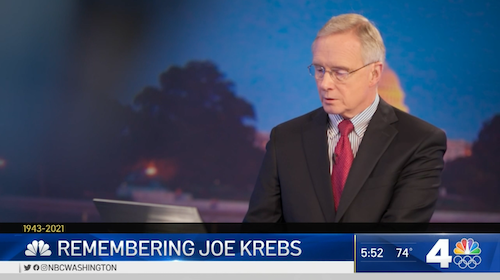 Krebs, who retired from the station in 2012, spent 18 years as a morning anchor at the station alongside Barbara Harrison and, later, Eun Yang.

“He just brought so much to all of our lives, to all of us who knew him from the newsroom, from the set, the people who would do the shows behind the scenes, they know that he was a very funny guy,” Harrison said.

He devoted 32 of his more than 40-year local television career to the NBC-owned station in Washington, D.C. Before coming to WRC in 1980, Krebs was a reporter in Greensboro, N.C., and he also worked at WBAL in Baltimore.

While at WRC, Krebs served 12 years as president of the Washington-Mid Atlantic chapter of SAG-AFTRA, and served as chair of the National Broadcast Steering Committee.

“Joe was a true union man. His breadth of knowledge & experience was an enormous asset to SAG-AFTRA,” the union tweeted. “The work he did in support of his fellow members & for the principles of fairness & justice will endure.”

In the Washington Post, Krebs is quoted as saying his approach to work was, “Go to work every day, take your job seriously, and mean to do it well.”

He is survived by his wife Mary Lynne, his children Anna and Emily, his brothers and sisters, and his grandchildren.