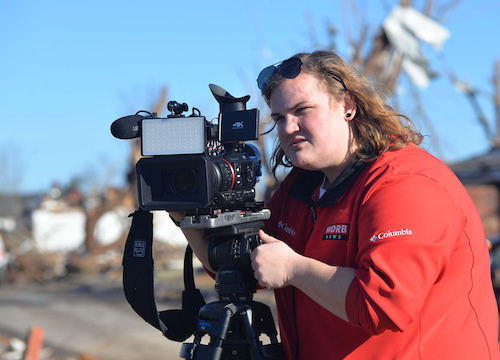 Local journalists went into overdrive after tornadoes swept through eight states this weekend, leaving at least 100 dead and many more still missing.

In the western Kentucky community of Dawson Springs, CNN said about 75% of the town had been “wiped out.”

Poynter.org gives a look into how some of the journalists who arrived on scene can maintain their objectivity while reporting on something so devastating.

WDRB photojournalist Emily Evans (pictured) said she learned to focus on one thing at a time when doing a job in overwhelming circumstances, but also added “you have to have a lot of compassion.”

“To these people that we are covering, this is the worst day of their life. They have lost everything,” said Evans who works for the Louisville, Kentucky Fox affiliate. “These people are grieving, and I still believe that journalism is a public service. I saw a grown man cry today while he walked me through what was left of his house. His Christmas decorations were still hanging there.”

WKRC reporter David Winter volunteered to drive from Cincinnati to Dawson Springs to report about what happened. He told Poynter he cried three times in one day of reporting.

“I was talking with a 5-year-old girl named Perlina. I have two kids at home,” said Winter. “She could not find her two cats who were lost in the storm, and then she found her dog. It was a relief after all that has been lost here. And still, she worried about those little cats.”

“I learned a long time ago that you can get overwhelmed by a disaster. Just focus on the little things. A child’s toy, a photograph, a sock,” said Winter.

Lauren Adams has deep roots in Mayfield, which was one of the towns hit by the storms. She is a weekend anchor for Louisville CBS affiliate WLKY.

“Before I got here, I had a pit in my stomach. It hurts so much to see a place I love in such pain. I tried to tell my family why we have to be here. Maybe the power of our words will move people to donate to help, maybe go give some blood,” said Adams. “Maybe it will just make people pay attention to weather warnings next time,” she said. “My husband’s family was born here. We would be here if I was not doing this job, but as a journalist, maybe I can do some good. These are such good people. I want to do my best for them.”

The work can take a toll on journalists. Evans said she is lucky her station “has embraced the fact that mental health is a big thing.”

“We have been through a rough year, a rough couple of years,” said Evans. “This stuff can sneak up on you. I have noticed that after a long stretch of covering something like this I find myself just getting all upset about the littlest thing. That’s when you know, it is time to pay attention to what you are feeling.”

Winter sees the chance to cover something this big as a privilege.

“I never understand why everybody does not jump at a chance to cover things like this,” said Winter. “I volunteered for this job because I still think it is important. Maybe I can make millions of people care about this one little town, and that is a public service and an absolute privilege.”