The Tegna-owned NBC affiliate, KUSA, is the social media leader in the Denver market, according to Share Rocket data from the last 30 days with a 33.6 overall share.

The Scripps-owned ABC affiliate KMGH jumped up two spots from fourth to second place with a 25.2 overall Share, and Tribune-owned Fox affiliate KDVR was just behind them in third with a 25.1 Share.

But the CBS O&O KCNC saw a big drop.  The station went from first to fourth spot with a 15.2 overall Share after the station generated more than 85% less Engagement than the 30 days prior. Share Rocket data shows that KCNC was one of many stations across the country that saw big gains from streaming the birth of April the Giraffe. The station’s live stream post on April 15, has more that 275,000 total engagements as of today. Since, things have shifted immensely in the market. All of the other stations Share Rock tracks in the market saw a Share increase by +65% or more compared to the previous 30 days.

KUSA’s main Facebook page was the top station page in the market and generated just shy of 800,000 Engagements over the 30 days. The station also had the No. 1 individual in the market on Facebook — anchor Kyle Clark, who averaged 685 engagements per post on his Facebook Page.

On Facebook, KMGH moved up two spots to No. 2 in the market as a station after increasing their Engagement on the platform +11.2% from the previous 30 days.

The No. 1 individual on Instagram was the co-host of KDVR’s The Everyday Show, Kathie J., who has the largest Audience of any individual in the market with more than 19,000 followers. 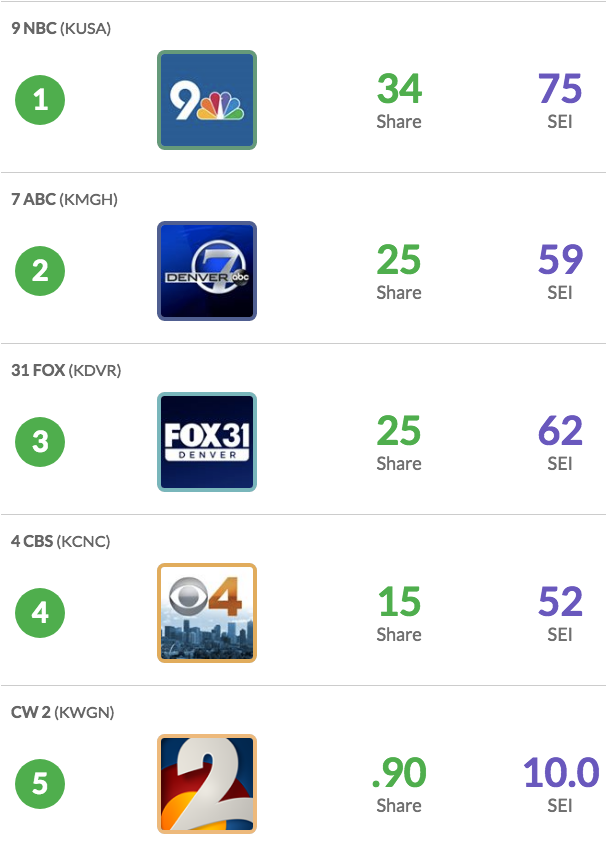