NEXT:Scott Warren Named GM of KPIX in San Francisco
PREVIOUS:Longtime Birmingham Anchor Leaving TV to Work on His Own Business 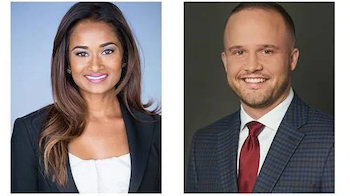 Philips, who goes full-time March 26, was a freelancer at the station. She’ll report on weekends and dayside during the week, while Rozier will report dayside weekdays starting April 11.

The station said Philips’ “hard work, creative approach to stories and deep knowledge of communities throughout Southern California have been a valuable addition to the news team.”

Before joining KNBC in 2018, Philips worked at KABC in Los Angeles. Before that, she worked at stations in Sacramento and in Billings, Montana.

Rozier comes from WFAA in Dallas—and previously worked in several other markets including KOMU in Columbia, Mo., KHQ in Spokane, Wash. and KING in Seattle.