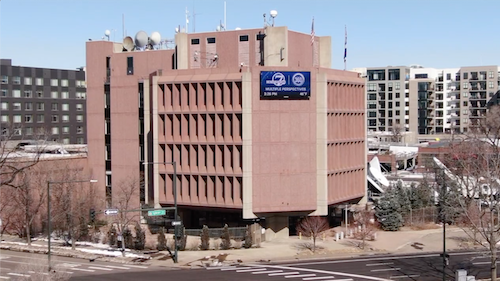 KMGH general manager Dean Littleton says he doesn’t want the station’s building designated as a landmark and he’s letting everyone know about it.

In a letter on the station’s website, Littleton holds no punches in saying why he’s going to court in May to fight an application submitted by three Denver residents to landmark the ’60s-era building.

“We don’t believe the bar for historic preservation is so low that a building like ours should qualify,” said Littleton. “Unfortunately, the decision has been taken out of our hands.”

Littleton says the station wanted to sell, but couldn’t find a buyer who didn’t want to tear the building down and build something new.

“To be blunt, it’s not a nice building in which to work,” he said. “It is a burden on our staff, our resources and our mission. This building is not well-suited for collaboration. It is dark, disjointed, inefficient, and terribly expensive to maintain. By its very nature, this is an unwelcoming building with no activation at the street level. It is dated and foreboding, offering little to the neighborhood beyond concrete walls and security fencing (an unfortunate byproduct of the current threats against the press). In fact, few Denverites have ever even stepped inside, and fewer will in the future if the site cannot evolve.”

Littleton says welcomes input from members of the public, but the Scripps-owned station plans to go before the Denver City Council on May 10 and fight the designation.