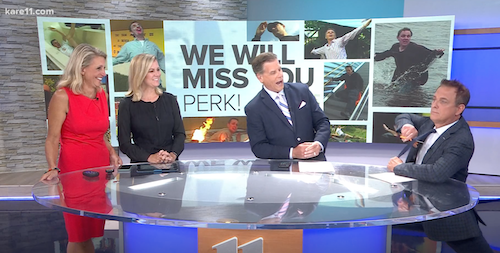 Eric Perkins, the sports anchor for Minneapolis NBC affiliate KARE, said goodbye to the station after 25 years last night in a memorable way.

Perkins, who said his hands were shaking while he told viewers goodbye, pulled out a pair of scissors on air and literally cut his tie while attempting the splits to illustrate that he would “cut ties and split” from his sports anchor role.

“I can’t think of a better spot to have landed and put down roots than here at KARE 11,” Perkins said before the goofy stunt. “My coworkers, way too many to name here, are absurdly talented.”

Perkins first announced his planned departure last month. He started working at the station in 1996 and may be best known for his Emmy-award-winning segment called Perk at Play, during which he would attempt “fun (and sometimes unusual) activities, including ski jumping, a demolition derby and even bullfighting,” KARE said.