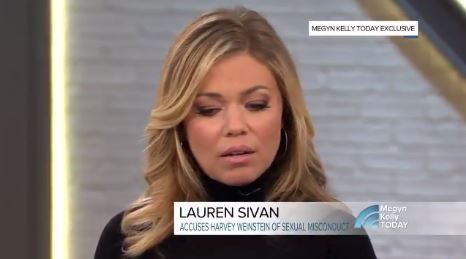 KTTV reporter Lauren Sivan went on Megyn Kelly‘s show today recounting an incident 10 years ago when she says movie mogul Harvey Weinstein sexually harassed her. She first told her story to Yashar Ali of The Huffington Post after reading what she believed was a halfhearted apology from Weinstein last week following numerous other allegations of sexual harassment. “That apology was the final straw for me. That’s when I said ‘enough is enough with this guy.'”

As for the incident in 2007 at a New York City club, Sivan explained to Kelly: “He cornered me… and leaned in and tried to kiss me which I immediately rebuffed. He exposed himself and began pleasuring himself. And I just stood there dumbfounded.”

WATCH: “He blocked the entrance… and said, ‘Just stand there and be quiet.’” @LaurenSivan speaks out about Harvey Weinstein pic.twitter.com/RYeVIyWOpZ

Sivan was an anchor at News 12 Long Island at the time. She went on to anchor overnights at Fox News and has been with FOX LA since 2011. She also explained why she didn’t come forward earlier with her story.

WATCH: "Why not go public? Why not go to the cops?" @megynkelly asks @LaurenSivan about her encounter w/ Harvey Weinstein pic.twitter.com/lphCJDdJjm