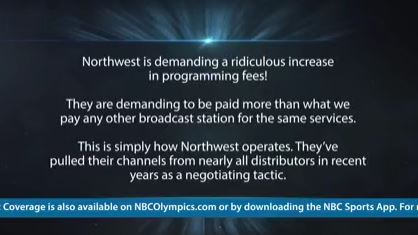 Brian Brady, the CEO of Northwest Broadcasting is accusing Charter Communications CEO Tom Rutledge of weaponizing his own customers “to do his dirty work.”

Northwest and Charter began negotiating a new re-transmission agreement last June. But after stops and starts, the current deal ran out on Dec. 31. Then, with 10 minutes’ warning, Brady says, Northwest stations were pulled from Charter’s Spectrum last Friday. As happens in these re-transmission battles, Spectrum then asked its customers to “take action now and let Northwest know you want a fair deal!”

In an open letter posted on the websites of Northwest stations, Brady fired back, writing, “Tom Rutledge the President and CEO of the second largest cable company on the planet doesn’t care about and has no respect for you. He only cares that he can use you as one more weapon in negotiating with our company while you continue to pay for the substandard service most of you have described to me.”

Northwest owns NBC affiliates in Arizona and Idaho, and Fox affiliates in Syracuse, Spokane, and Yakima, which are carried on Spectrum.

“It is troubling that a company of that size and scale could be so cold and calculating that they would sacrifice the loss of subscribers in smaller communities around the country,” Brady writes. “People in Yuma, AZ, Crescent City, CA and Jackson, WY couldn’t see the Super Bowl while [Rutledge] was most likely sitting in a luxury box in Minneapolis enjoying the game. These same people will not be able to see the Winter Olympics while he will also likely be in South Korea enjoying yet another sporting event he chose to withhold from his subscribers.”

While not commenting on Brady’s letter, Charter says in a statement, “Northwest’s fee increase demand of over 75 percent is outrageous especially given that their programming is available free over the air and online.”

“We’ve closed 20+ deals with the largest cable providers in the country and we offered them the same deal,” Brady told TVSpy. “We have been in tough retans battles in the past, however this is the first time a provider refused an extension and forced a take-down of our stations.”