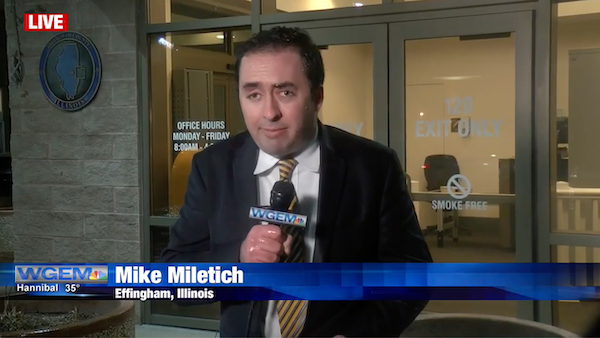 As Miletich was reporting live on a lawsuit against a statewide assault weapons ban, he could be heard stumbling through his report because, as he explained, the rain was blurring the script on his phone. When he tossed back to the studio, a loud car drove by prompting Miletich to adlib “and of course cars are driving past right now because we are in Downstate Illinois where they hate the media.”

If you were watching our Wednesday WGEM News at Six report on the Illinois assault weapons ban lawsuit filed by attorney Tom DeVore, we owe you an apology.

Reporter Mike Miletich ad-libbed while reporting live from Effingham to say in part, ‘…we are in downstate Illinois where they hate the media.’ That is not a fact. The facts show we have many loyal viewers who are very supportive of this television station.

Mike chose to express his opinion, which is not acceptable for a journalist working for this news organization. Our news division is disappointed by what was said, and our leadership team is addressing the matter.

Miletich’s bio has been removed from the station’s website.

We asked Gray about it and will post what they say when they get back to us.