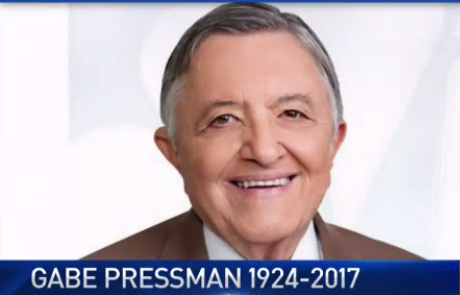 Iconic New York television journalist Gabe Pressman passed away early this morning at the age of 93. His death was confirmed by his station, WNBC-TV.

Pressman, who was still employed by the station as senior correspondent, reported on breaking news, covered politics, parades, protests, interviewed myriad New York luminaries and cultural icons over a TV news career that began in 1956.

He reported on events including the assassination of Pres. Kennedy, The Beatles’ first trip to the US, and Woodstock. He also conducted one-on-one interviews with Marilyn Monroe, Harry S. Truman and Fidel Castro for New York’s NBC affiliate.

Pressman has earned an astounding number of awards over his career. According to NBCNewYork.com, these include: 11 Emmy Awards; the 1989 Edward R. Murrow Award; the New York Chapter of The National Academy of Television Arts and Sciences 1986 Governors’ Award; a 1985 Olive Award for Excellence in Broadcasting; a Peabody Award in 1984 for Asylum In The Streets; a Unity award from Lincoln University in 1981 for Blacks And The Mayor: How Far Apart?; the New York Press Club’s Feature Award for The Homeless in 1982; the UPI New York State Broadcasters’ Award for Best Feature News Story The Homeless in 1982; the New York State Associated Press Broadcasters Association Award for Excellence in Individual Reporting in 1982; the New York Chapter Of Professional Journalists, Sigma Delta Chi’s Deadline Club Award for “The Hungry” in 1983; and two New York area Emmy Awards in 1983 for The Homeless.

“This is an incredibly sad day for the WNBC family. Gabe Pressman was a television icon who served our viewers for more than 50 years,” Eric Lerner, WNBC president and gm, said in a statement. “He was truly one of a kind and represented the very best in television news reporting. Gabe was still coming to work and thinking about the next story. He was a treasured colleague and friend to all of us and he will be missed. We extend our deepest condolences to the Pressman family during this difficult time.”

In Pictures: A look at the life and iconic career of Gabe Pressman https://t.co/Jj5EhvAhl1 #Gabe4NY pic.twitter.com/DGnaH5SQfg

We have lost a stalwart journalist, an incredible man, and a New York media giant. I’ll miss you, Gabe. https://t.co/JAPkI3f5OX

Gabe Pressman was a pro’s pro – the consummate journalist. He was a mentor & friend & 1 of the sweetest men ever. Love you, Gabe.

Just in to @NY1: longtime NYC TV newsman Gabe Pressman died in his sleep this morning. He was 93 years old.

Incredibly sad to learn about the passing of an icon. @Gabe4ny – Gabe Pressman was an amazing man , journalist and story teller pic.twitter.com/ENXZwWl56D

Joining my friends at WNBC in NY in mourning loss of Gabe Pressman. Broadcast news pioneer and role model to generations of news people.

Saddened to hear about Gabe Pressman: a giant of New York news, a mentor to generations of (wide eyed) WNBC reporters, and great friend. RIP

Gabe Pressman was relentlessly fair and trustworthy and knew politics like no one else. He was pretty good with a stopwatch too. RIP. pic.twitter.com/kGoQQjTcsG

Will never forget Gabe Pressman giving Bloomberg his “welcome to the Thunderdome” lesson at the first campaign press conference.

A true loss: relentless 60-year NYC reporter Gabe Pressman dead, 93. I interned in his newsroom, he was great to all https://t.co/7Xqrxlswgg

There will never be another Gabe Pressman, nor will there ever be anyone like him. I am truly lucky to have known him and learned from him.