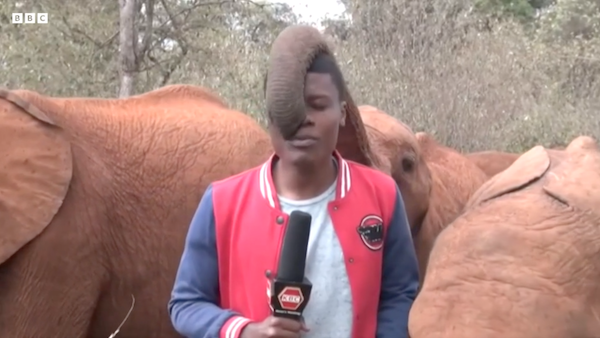 Happy Friday to all who celebrate! In this week’s edition of stories we didn’t get to, we see a baby elephant saying hello to a reporter in a live shot and more veteran reporters saying goodbye to local TV. Seriously. Is it just me or does it seem like there are more retirements than hirings lately?

A baby elephant got a bit too familiar with journalist Alvin Kaunda who was reporting for Kenya’s Broadcasting Corporation (KBC) on the way baby elephants at the orphanage were being looked after during a drought. Click here to watch the hijinks.

Former WFMB anchor Barbara Lee Edwards talks about her life after TV news and recovery from a near fatal brain injury. Click here to read more.

WGAL morning anchor Mike Hostetler is retiring after 46 years in the business. He’s worked at the Lancaster, Pennsylvania NBC affiliate for 33 years. Click here for more.

Longtime KCAL reporter Alan Mendleson died at the age of 70. Click here to read about it.

Here’s part of a press release from CBS News and Stations about a story from its new Innovation Lab:

CBS’ new Local News Innovation Lab has partnered with CBS-owned stations across the country to produce a data-driven investigation covering numerous reports of elementary school-aged children being arrested at school.

CBS said the Innovation Lab’s analysis of U.S. Department of Education data has found hundreds of students across the country have been handcuffed at school for relatively minor disciplinary actions, including a disproportionate number of Black children and children with disabilities.

The reports by CBS Stations investigative correspondent Stephen Stock started last night on CBS stations, report on the states with the most elementary school arrests during CBS-owned stations’ local newscasts this week, Stock will report on why the arrests are happening, the impact on children, which students are most affected and potential solutions that are being explored.

The Innovation Lab team’s analysis found more than 700 children (fifth grade and younger) were arrested in U.S. elementary schools during the 2017-2018 school year alone. Children with documented disabilities were found to be four times more likely to be arrested at school, according to the analysis of the 2017-18 U.S. Department of Education data. Black students were even more disproportionately affected. They made up nearly half of all arrests at elementary schools during the 2017-18 school year even though they accounted for just 15% of the student population in those schools.

In his report, Stock holds local, state and national officials accountable, asking why arrests of children are happening under their watch. Stock showed assistant secretary for the Department of Education office of civil rights Catherine Lhamon video of a 7-year-old autistic boy being arrested. “There’s very little that I saw in that video that is acceptable, and there’s very little on that video that is consistent with federal civil rights obligations,” Lhamon said.

Following Stock’s report, CBS-owned stations in 14 major markets will follow up this week with localized reporting that identifies specific schools where students have been arrested in their communities.

“This latest collaboration between the CBS Local News Innovation Lab and our stations across the country illustrates the breadth and depth of our reporting capabilities as part of our unified CBS News and Stations organization and shines a light on disturbing local and national events,” said Adrienne Roark, president of CBS Stations. “The Innovation Lab is a tremendous resource for our stations and we look forward to continue to report data-driven stories in a way that super serves our audiences and differentiates CBS Stations from its competitors.”

“We prioritize solutions journalism in projects like this, aiming to generate conversation, engagement and potential action in our communities,” said Chad Cross, vice president of content development at CBS Stations. “On this issue, we believe it’s important for our communities to see what’s happening in Georgia. In 2018, the state changed its approach, training their school resource officers to help students reach graduation, rather than making arrests. We discovered this by attending a conference of school resource officers this summer, and we knew it needed to be a primary part of the story.”

Cross added that the Innovation Lab began working on this investigation after seeing WBBM-TV investigative reporter Dave Savini and his colleagues report on arrests at schools in the Chicago area. “We decided it was something to scale across our station group, and also we chose to look at the youngest age group (fifth grade and younger), something we believe has not been reported on previously.”

In addition to Stock’s national report and localized CBS Stations’ stories, additional information about the “Handcuffs in Hallways” investigation will be published on the stations’ websites. The supplemental online reporting includes a look at school resource officers (SRO) and whether they make kids safer at school. This story features an interview with a University of Delaware professor of sociology and criminal justice about his study of SROs.

And one from KMBC in Kansas City:

Kansas City, MO – November 18, 2022 – Once again, KMBC will serve as the live broadcast home of this year’s Evergy Plaza Lighting Ceremony. The Kansas City tradition will air Thanksgiving night at 6:00. An hour of entertainment will culminate with the flip of a switch—illuminating thousands of lights at the Country Club Plaza. Viewers can watch the event live on KMBC channel 9.1 and on kmbc.com. Viewers will then be able to watch the event on demand via the Very Local app which is free to download on many smart TVs and devices.

“The lights at the Plaza have been a beloved holiday experience for decades. Generations in Kansas and Missouri have grown up with the tradition,” said KMBC KCWE President and General Manager Justin Antoniotti. “We are proud to be part of this event that is so engrained in the DNA of Kansas City and happy to know that thousands more will get to experience the night at home because of our partnership with the Plaza.”

The broadcast will include live, holiday-themed musical and dance performances. Negro Leagues Baseball Museum President Bob Kendrick will serve as the honorary switch flipper—lighting the Country Club Plaza for the remainder of the holiday season. The best view of the lights and a subsequent fireworks show will be provided by Kansas City’s only news helicopter, Newschopper 9.

“There is no bigger annual community event than Evergy Plaza Lights,” said KMBC 9 News Director Dan O’Donnell. “It’s an honor to be part of the tradition. We’re excited to share the experience with all our viewers.”

There’s a new option this year for viewers who miss the live broadcast. All December, on-demand viewing will be possible through the Very Local app, which is available on Roku, Amazon Fire, and other smart TVs as well as Apple and Android devices. Users can search “Very Local” in their app store to find the free download.