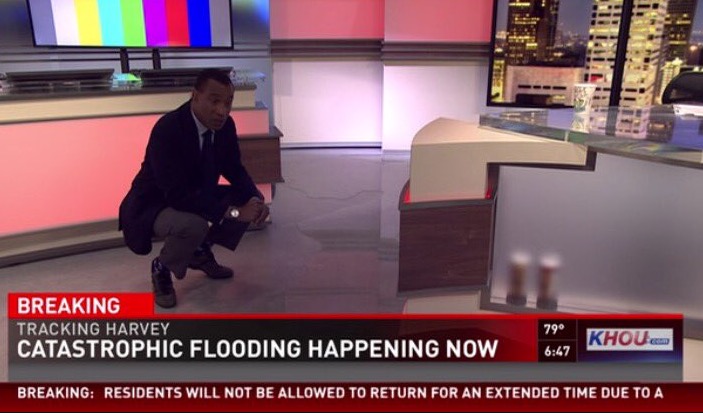 KHOU, the Tegna-owned CBS affiliate in Houston, has been in continuous coverage of Hurricane Harvey for days. But this morning they became part of the story as Harvey’s torrential rains have begun seeping into the KHOU studio just west of downtown. The nearby Buffalo Bayou is over its banks.

“There was water coming in the studio on the first floor of the station,” said anchor Len Cannon. “So we had to adjust, bring the cameras upstairs.”

Just before 7:30 a.m. CT, the anchors began using a conference room-turned makeshift studio to continue coverage. “At the moment we are not able to go to our crews who are out all over the place to bring the you live reports because technically we are just not there yet,” said Cannon. They were able to go to their meteorologist for updates, however.

KHOU broadcasting live out of their upstairs conference room because water is now flooding into their studio. Just scary… pic.twitter.com/E3oYKeOO0b

One last look at my desk… #KHOU11 pic.twitter.com/7NknJjvoLy

More: After attempting to stay on the air, the station was evacuated late Sunday morning.

Houston needs our prayers! Our TV station is evacuated. Headed back out in the field to help us get back on the air #Harvey #KHOU11 ? pic.twitter.com/roq8Q6xlZN

The evacuated #khou11 weather team. They did a damn good job. Stayed on the air keeping Houston informed. They'll be back. #Proud pic.twitter.com/KV4qLm0yx1

The station went off the air for a time, but reporters kept doing their jobs on social media and YouTube. Staffers went to the PBS station in Houston and attempted to get back on the air. WFAA, the Tegna-owned ABC station in Dallas also supported KHOU by providing on-air coverage in Houston.

#KHOU11 is back on the air! My friends and coworkers doing great work, and getting a huge assist from the talented folks at @wfaachannel8