NEXT:Scripps Begins Sale of Radio Stations, Starting in Tulsa
PREVIOUS:Tampa Anchor Is a Victim of Cyberbullying, After Being Misidentified in Racist Rant Gray Television announced it will acquire Raycom Media for $3.65 billion.

The move comes less than a year after the FCC loosened restrictions on media company consolidation in the same markets across the country.

After the merger, Gray will be the third-largest owner of local TV stations with 142 stations in 92 markets, reaching about 25 percent of U.S. households.

“This new portfolio of leading local media outlets will excel at what they do best, which is to provide the local news that local communities trust, the entertainment and sports content that viewers crave, and the incredible reach that advertisers demand,” said Hilton Howell, CEO and chairman of Gray Television.

“We are thrilled to be joining Gray Television as we share the same core values of journalistic excellence and community service,” added Pat LaPlatney, president and CEO of Raycom Media “Together, we will be a stronger, more impactful force for our audiences, advertisers, and communities.”

The transaction will consist of $2.85 billion in cash, $650 million in a new series of preferred stock and $11.5 million in Gray stock. 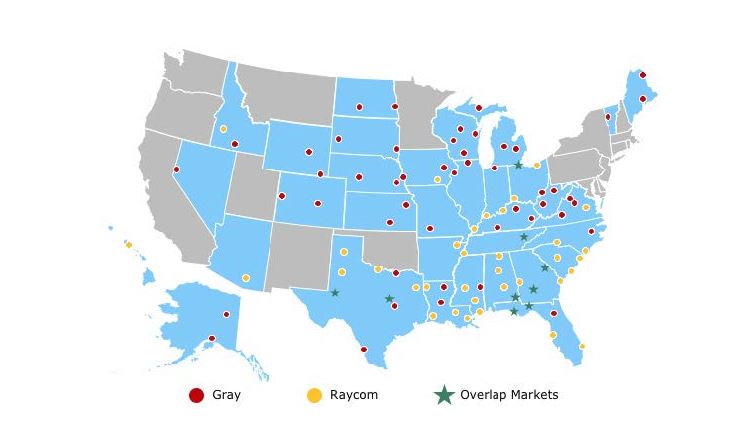