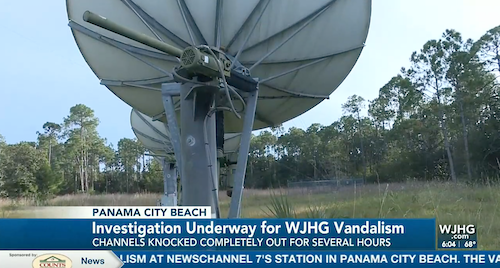 Gray-owned station WJHG has been knocked off the air after the cables to its satellites were severed by a vandal.

Bay County Sheriff Tommy Ford said his department is conducting a criminal investigation after all the cables to nine of the Panama City, Fla. NBC affiliate’s satellite dishes were cut, affecting all eight of the networks broadcast by the station.

The station said around 9:30 Sunday night, its signal abruptly went off the air. A WJHG employee went outside to see what happened and saw a man he didn’t recognize near one of the satellite dishes.

The employee told deputies the suspect was a white male, dressed in a dark jacket and camouflage.

“Processing the area as a crime scene,” said Ford. “Fingerprints and DNA, things of that nature in an attempt to once we locate a possible suspect, to tie them back to that area.”

“I think as we progress. we are evaluating all of the connections that were cut, which were extensive,” said Carlini.

The sheriff said the suspect could face federal charges once caught.

WJHG told viewers they can watch its news on its website, its news app or on VUit.comits.