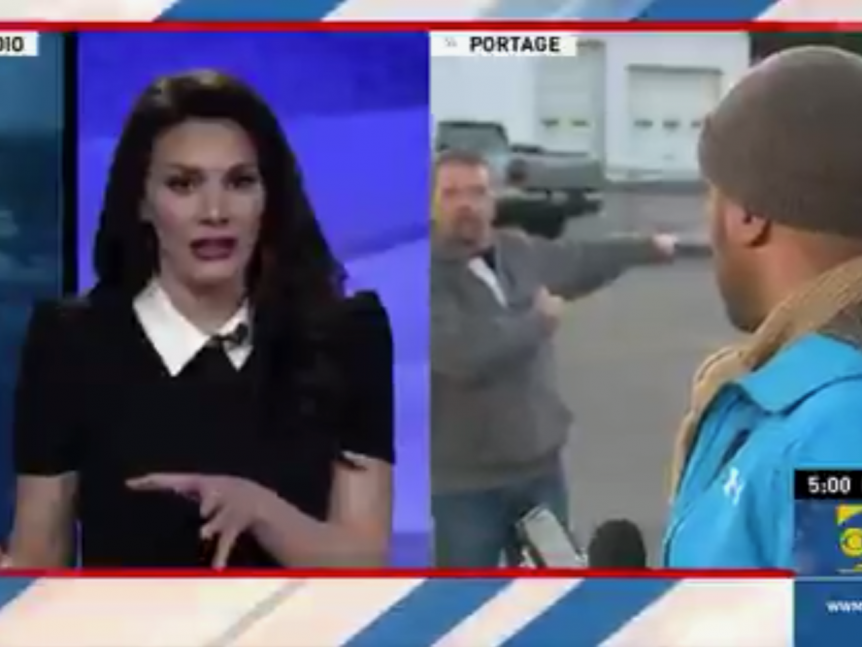 A Kalamazoo, Mich. reporter got an unexpected interruption right before going live—but he didn’t miss a beat.

During a Wednesday broadcast, WWMT anchor Erica Mokay tossed to reporter Tarvarious Haywood, who was live outside a restaurant to report on The Michigan Restaurant & Lodging Association losing its lawsuit to overturn a state order pausing indoor dining. The ruling maintains that people cannot dine indoors due to the Covid-19 pandemic through at least Dec. 8.

Just before Haywood was set to begin his report, Dave Morris, the owner of restaurant D&R Daily Grind in Portage, Mich., walked into the shot and started speaking loudly to Haywood, which was audible as Mokay ended her segment.

The station kept the live feed in a split box where viewers could see Morris walk up to Haywood and express his displeasure at the ruling. Morris is currently violating the government’s orders and opened for indoor dining, which is punishable with a fine of $1,000 a day.

Haywood seamlessly transitioned into an on-air interview as Morris told him that he thought small businesses hadn’t gotten enough relief to stay closed.

“My government leaders have abandoned me,” Morris said. “You could have given me money, I gladly would have walked away for 60 days to let this virus settle down.”

Reporters praised Haywood’s handling of the interruption and his pivot to an unplanned interview. A video of the exchange, which Haywood uploaded, has more than 2 million views.

An angry business owner interrupted me moments before my live hit. He wanted to express his anger about Michigan’s current covid-19 restrictions. So, ok kool you can express your anger, just know I’m asking hard questions in return.💪🏾Journalism 101 always be ready! pic.twitter.com/TIcJRv8R4J