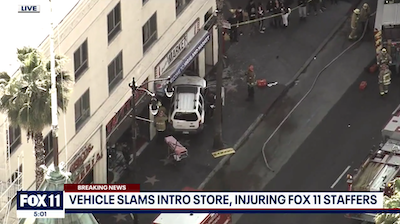 KTTV reporter Hal Eisner and photojournalist Joab Perez are in the hospital after an SUV drove across the Hollywood Walk of Fame and slammed into a store on Hollywood Boulevard.

The Los Angeles Fox owned station says five people were hurt in the accident. Four of the victims, including Eisner and Perez, are in serious to critical condition. The driver refused to be taken to the hospital.

Eisner and Perez were working on a story about the reopening of the El Capitan Theatre on West Hollywood Boulevard when the accident occurred at around 3:15 p.m.

During a live shot on scene (see the video below), KTTV reporter Koco McAboy got emotional talking about the accident. She said Police arrested the driver for suspicion of Driving Under the Influence. The suspect told police he fell asleep at the wheel.

Eisner has spent most of his 38 years in television at Los Angeles station. Perez has worked there for nearly three years. KTTV anchor Elex Michaelson says Perez brings “passion and positivity to every story he works on.”