WTVT, the Fox owned station, held onto the number one spot in Tampa over the last 30 days with a 43.4 overall Share, followed by WFTS, the Scripps-owned ABC affiliate with a 22.4 overall Share.

As a group, WFTS station generated +35.9% more Engagement in the last 30 days than it did in the 30 days prior to that, which caused the station’s Share to improve by +17.7% during that time.

Overall, Engagement was up for the month in the market, with three stations, WTVT, WFTS, and WFLA, improving their total Engagement by +13% or more compared to the month prior.

Among individuals overall, Dellegatto led the way with a 5.00 Share across all platforms. His Facebook posts over the last month have averaged more than 1,377 Engagements per post. Denis Phillips had a 2.44 Share and was also strongest on Facebook, where he averaged about 856 Engagements per post. Phillips also grew his Audience on the platform by an incredible +41.1% over the last 30 days, making him the second person in the market to break the 100,000-follower mark on the platform.

WTVT anchor-reporter Jennifer Epstein was the leader in the market among non-meteorologists, generating more than 46,000 Engagements across all platforms.

Finally, WTSP Meteorologist Bobby Deskins made the cut for the top five in the market. Deskins posted +40% more on the platform than he did in the 30 days prior, and saw his Engagement on the platform grow by +746%, his Audience grow by +30.9%, and his Share grow by +293% during that time.

Of the top 10 individuals in the market, four work for WTVT, four for WFTS, and one apiece work for WFLA and WTSP. 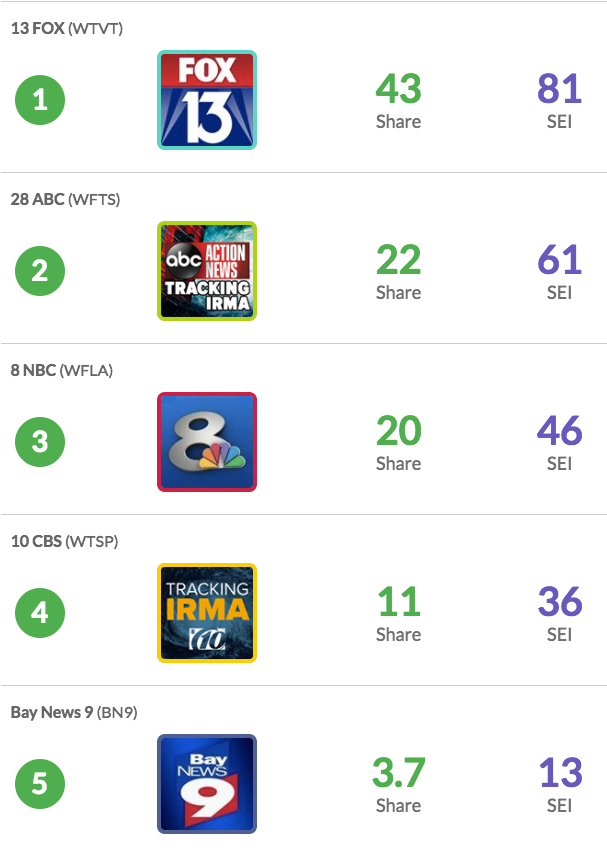