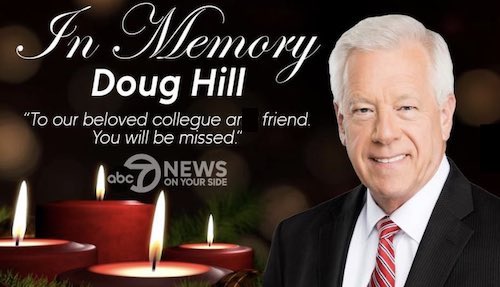 Doug Hill, former WJLA chief meteorologist, has died at the age of 71.

Hill retired in 2017 after working as a meteorologist in Washington, D.C. for 33 years.

He was a Prince Georges County police officer before he started working as a meteorologist. After stops in Richmond, Va. and Detroit, he moved to Washington, D.C. in 1984 to work at WUSA. He joined WJLA in 2000 as chief meteorologist.

In a tribute on its website, the station called Hill, “the best of the best, one of the most familiar and popular faces on local television.”

“He was always mentoring,” weekend meteorologist Alex Liggitt, told the Washington Post. He said Hill was like his “second dad.” “People would send him tapes from across the country, and he would always take the time to look at them and give feedback,” said Liggitt.

Hill said he wanted to focus on his family and on Christian ministry in retirement. He told the Calvert Record in a 2017 interview, “I have been wearing a suit my whole life for five days a week. It’s time to move on.”

“I am in shock over the loss of this wonderful man. Doug Hill was so many things. He was a talented meteorologist, the best of the best,” said WJLA anchor Alison Starling on Twitter. “He was a kind, funny family man deeply rooted in his faith. It was an honor to work with him, and Doug, we miss you so much already,”

“I am forever grateful for his guidance and friendship and thankful for all of those years that I got to work alongside him,” Meteorologist Brian van de Graaff said on social media. “There is not a greater compliment than when a person says I did or said something that reminded them of Doug.”