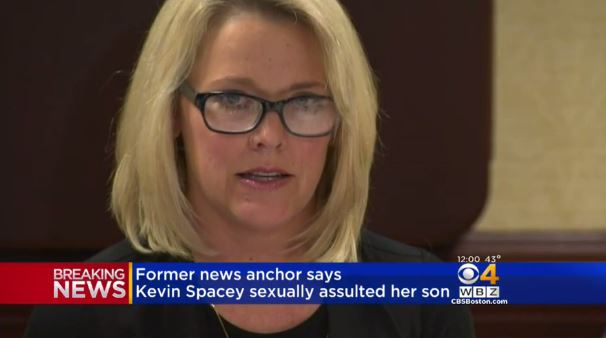 Former WCVB anchor Heather Unruh is meeting with the district attorney that oversees the Cape and Islands in Massachusetts.
TVSpy reported when the former anchor opened up about actor Kevin Spacey sexually assaulting her son on Nantucket in 2016.

Here is a snippet from a story on Mass Live:

The Boston Globe reports the meeting will take place soon and District Attorney Michael O’Keefe wants all the information relevant to the alleged sexual assault.

In an announcement last week, former WCVB-TV news anchor Heather Unruh accused Spacey of sexually assaulting her then 18-year-old son at the Club Car bar in Nantucket in July 2016. Unruh’s son worked as a busboy there.

Unruh accused Spacey of forcing his hand down her son’s pants. Her son left when Spacey went to the bathroom and told his sister. He has since reported what happed to Nantucket police.

Her son was 18 years old at the time.

Unhurt first posted on Twitter about Spacey last month saying the actor “assaulted a loved one.” She joined the ABC affiliate in Boston in 2001 and left last year.