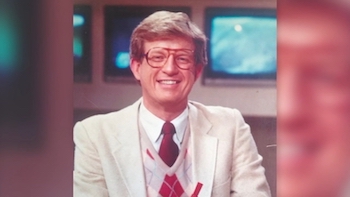 Bartlett became a meteorologist while in the Air Force in the 1960s and later worked at PG&E before joining San Francisco CBS station KPIX in 1974. In 1989, he joined ABC owned KGO until his retirement in 2006.

It was at KPIX that Bartlett, unbeknownst to him at the time, would create something that would become his trademark through the years.

“We had a big weather map, and I’d write the temperatures on that map with a big Magic Marker pen,” Bartlett explained to Off Camera in 2012. “While doing the weather, I started flipping the Magic Marker in the air. I started doing it occasionally, then I started doing it every night, when it was appropriate. I’d then tell viewers to ‘go out and make it a great day.’” That line, and the pen-flipping, would become Bartlett’s signature. Viewers loved it. In fact, Bartlett estimates he dropped the pen only three or four times while live on the air, out of the tens of thousands of times of throwing pens in the air.