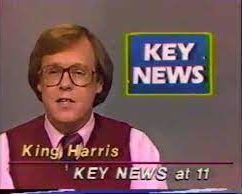 Former KEYT anchor and news director King Harris has died at the age of 75.

Harris was the main anchor for the Santa Barbara, Calif. ABC affiliate from 1984 to 1997. He briefly served as the station’s news director and went on to produce news at KCOY in Santa Maria.

He started his career at a television station in Monterey before coming to KEYT. After leaving KEYT, he taught journalism at Cal Poly for two years, before joining KVEC radio in San Luis Obispo as news director.

The station said Harris collapsed unexpectedly and paramedics were not able to revive him.

“King had health issues, but he was in good spirits the whole time. We’re all in shock at the news. Total shock,” he said. “My favorite radio memories all involve the times I shared with King Harris. He truly was the King.”