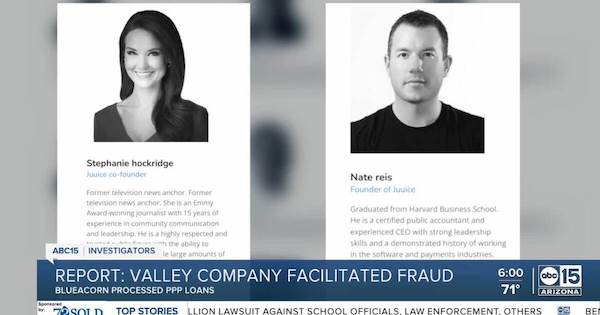 In a recently released report by the Select Subcommittee on the Coronavirus Crisis, former Phoenix anchor Stephanie Hockridge and her husband Nathan Reis are being accused of potential fraud involving Paycheck Protection Program loans.

Hockridge, who worked at ABC affiliate KNXV until 2018, and Reis are accused of enabling fraud and profiting off money meant to help small businesses during the pandemic through their company BlueAcorn PPP.

In the report, BlueAcorn is accused funneling nearly $300 million in profits from its $1 billion in processing fees to its owners while only spending $8.6 million—less than one percent of the fees it received for its PPP work on fraud prevention.

“The PPP loan applications for Mr. Reis and Ms. Hockridge contain inconsistencies indicating that Blueacorn’s owners—who were personally involved in running fraud prevention and eligibility verification efforts for the fintech—may have themselves committed fraud against the PPP,” read the report.

Among the accusations in the report:

Blueacorn’s owners directed reviewers to prioritize “monster loans [that] will get everyone paid” and created an exclusive category of PPP loans, called “VIPPP” loans. Blueacorn’s owners were dismissive of other loans, writing “delete them,” “who f***ing cares,” and “[w]e’re not the first bank to decline [PPP] borrowers who deserve to be funded… they go elsewhere.”

Blueacorn’s founders arranged PPP loans for themselves through Blueacorn, some of which have signs of potential fraud. In addition to likely taking over $120 million in taxpayer-funded PPP processing fees as personal profit, Mr. Reis and Ms. Hockridge received nearly $300,000 in PPP loans, some of which were facilitated by their own company.

In one application, Mr. Reis falsely claimed to be an African American and a veteran. Other applications contain questionable information that merits further investigation. The Select Subcommittee discovered that, after participating in the PPP and getting many of their PPP loans forgiven, Mr. Reis and Ms. Hockridge relocated to Puerto Rico, where they apparently founded another lender service consultancy.