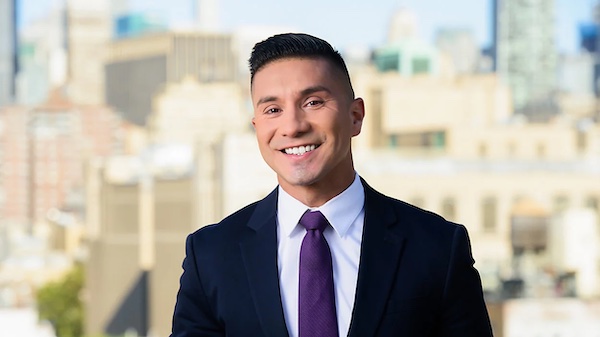 Former NY1 meteorologist Erick Adame has posted a statement to Instagram claiming he was fired after someone on an adult website took nude photos of him and sent them to his boss and his mom.

“Despite being a public figure and being on television in the biggest market in the country in front of millions of people five days a week for more than a decade and a half, I secretly appeared on an adult webcam website,” said Adame.

Adame has filed a lawsuit in the matter.

“It was absurd of me to think I could keep this private,” he said in his Instagram post. “Nevertheless, my employer found out and I was suspended and then terminated.”

In his lawsuit, Adame said someone took naked photos of him without his permission on the video chat website Unit 4 Media LTD. The person then sent the pictures to Adame’s mom and to NY1 “with intent of harassing, annoying, or alarming [Adame] and tortiously interfering with [Adame’s] employment relationship,” the court documents said.

Adame apologized to his employer, his co-workers, his audience and friends and family “for any embarrassment or humiliation I have caused you,” he wrote. “I had the job of my dreams and I lost it due to my own lapse in judgment.”

He also said he was “getting the professional help I need so I can make appropriate decisions that don’t affect those I care deeply about, as well as my career, as I move forward in my life.”

Saying he’ll be “an exemplary employee” Adame added that he doesn’t apologize for being gay or sex-positive and asked that future employers give him a second chance.

Unit 4 Media’s lawyer Lawrence Walters told The New York Post, which first reported the story: “Our client’s policy is to comply with lawfully issued subpoenas and to provide relevant user data when legally required,” said Walters. “Capturing and disseminating user content without consent violates our client’s Terms of Service and forum Rules, which may result in a suspension or banning of the offending accounts.”