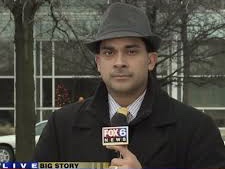 Former WITI reporter A.J. Bayatpour, who was accused of punching another reporter in the face, has entered into a plea deal.

The deal helped him avoid a felony charge.

Back in April, the 31-year-old Bayatpour was charged with battery for an incident at Miller Park in Milwaukee. Police say he broke the nose of the other reporter.

Th Milwaukee Journal Sentinel reports Bayatpour’s charge will be reduced to a misdemeanor.