KRIV, the Fox owned station in Houston, leads the social media ratings market and gained 7.2% of the total market share with a 31.7 overall. They have a 5.8 share point lead over KTRK, the ABC owned station, who has a 25.9 overall share.

KRIV’s main Facebook Page was the biggest factor in its bump in Engagement, according to Share Rocket data. The KRIV Page accounted for more than 2.25 million Engagements, which was about 92% of the station’s total Engagement on Facebook and a +25.7% increase from the prior 30 days.

KPRC, the Graham owned NBC affiliate, moved from fourth to third in the market with an overall 18.1 Share. This is thanks to an overall increase in engagement. KHOU fell to fourth place with a 17.7 overall Share.

As a group, KRIV had a 32.6 Share on Facebook, followed by KTRK with a 25.4 Share, KHOU with an 18.1 Share, and KPRC with a 16.4 Share. KPRC’s Jennifer Reyna generated more than 45,000 Engagements on the platform in the last month and was the top individual on Facebook with a 0.68 Share. KTRK and KRIV’s main Facebook Pages are the only social media accounts in the market to crack the 1 million follower mark, and KTRK has the largest Facebook Audience as a group with more than 1.87 million followers. KRIV increased its total group Facebook Audience by +5.3% in the last 30 days.

On Twitter, KPRC jumped from fourth overall to first with a 33.5 Share on the platform after the main station account saw a +288% increase in Engagement compared to the month prior. Much of that came from this July 30 tweet of a boy with Down syndrome singing Whitney Houston’s “I Have Nothing” that has about 115,000 Engagements to date. The station also got a boost from reporter Deneige Broom, who went from the 66th overall Twitter account in the market to the 5th, also thanks to a big viral tweet. Broom’s post was a photo of a dog she ran across while covering flooding in the city that managed to rack up a little more than 20,000 Engagements.

KRIV moved to first on Instagram with a 30.4 Share as a group in the last 30 days after the station was third in the month prior.

Among individuals overall, Dominique Sachse led the way with a 1.1 overall Share and nearly 90,000 total Engagements in the 30-day period. 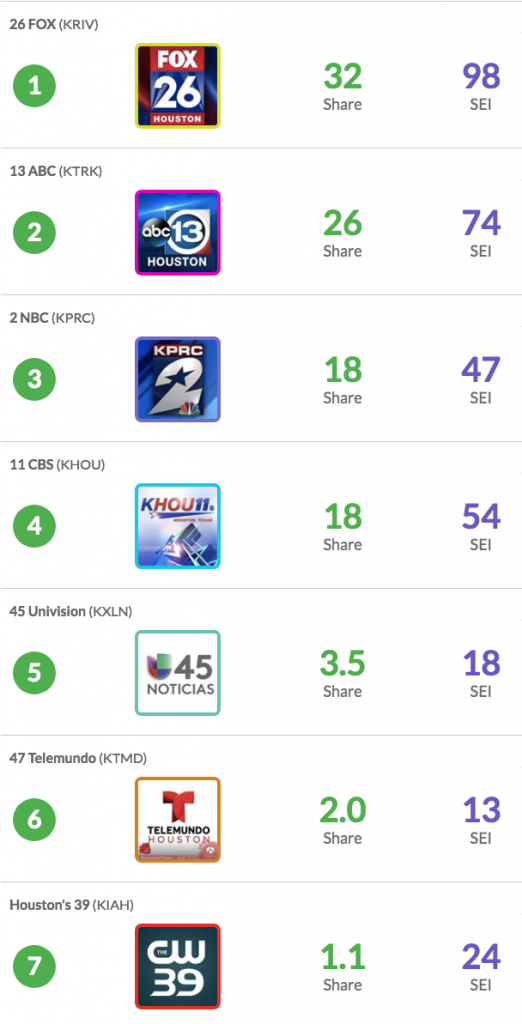