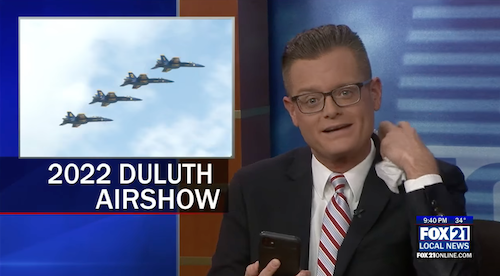 KQDS anchor Dan Hanger hopes viewers don’t judge him for how he spends his time on the anchor desk when he’s not on camera.

Recently, viewers saw Hanger looking down for an awkward amount of time after coming back to camera.

Hanger, who has worked at the Duluth, Minn. Fox affiliate since 2010, addressed the incident right after it happened during the Wednesday nightly newscast.

“Oh my—you guys! I seriously didn’t know I was on!” said Hanger on air. “Look at my glasses, I thought we were going to weather. Isn’t that funny?”

The anchor owned up to what he was doing.

“Who cares, so what? I was looking at Instagram,” he said, before launching into the next news story.

Hanger shared the video on his Facebook page. You can watch it here or below.