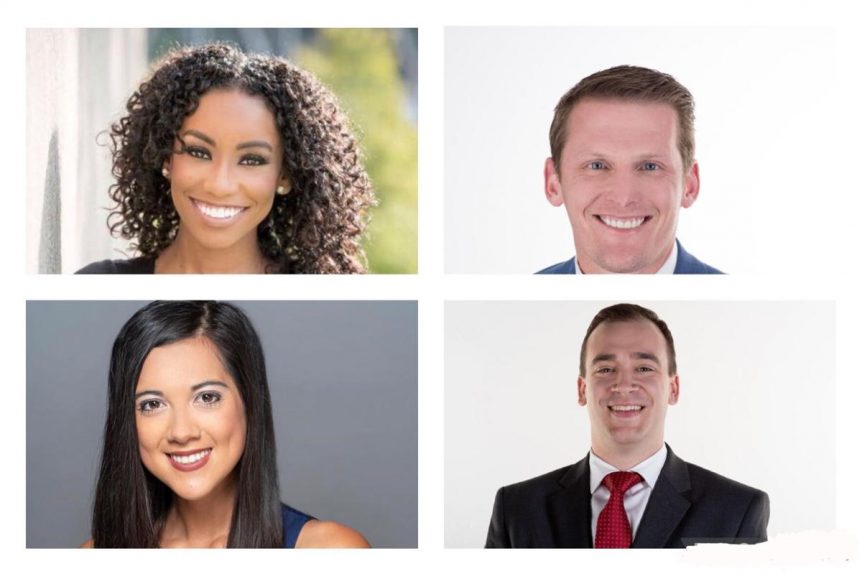 The Colorado Springs market has recently seen some local station turnover, with four new hires filling in for recent moves at two stations.

McPherson last worked as weekend anchor and reporter at WDJT in Milwaukee, and Victor comes from ABC affiliate KMIZ in Columbia, Mo.

“After 16+ years in the Midwest I’m excited for this next step, and I’m joining a great team!” McPherson wrote on Twitter. “Now where’s the coffee?”

Over at NBC affiliate KOAA, Briana Aldridge (upper left) takes over for Jake Gadon as a sports reporter and anchor after Gadon was promoted to sports director in early April.

“It’s been a longtime goal of mine to be behind the sports desk and I’m so thankful for the opportunity and the people in my circle who continue to support me throughout my journey,” Aldridge, who last worked at KATC in Lafayette, La., wrote on her Facebook page. “Thanks for everything Cajun Nation!

Also at KOAA, Caroline Peters (lower left) will fill the empty reporter slot left by Jessica Barreto, who went to work for WJAX in Jacksonville, Fla. Peters comes from at WTRF in Wheeling, W.V.