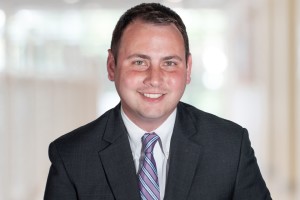 WCPO reporter Jake Ryle is taking a month off to focus on his mental well-being—and in the process hopes to “break down the stigma of discussing mental health.”

Ryle, who works for the Scripps-owned Cincinnati ABC station, tweeted Monday night that, “You won’t see me on TV for a few weeks. I’m still here. I’m okay.” He continued, “I’m taking a leave for the month of October to focus on my mental health and well-being.”

Last year, Ryle was diagnosed with anxiety and persistent depressive disorder. While he tried to ignore those “hurdles” at first, he said, “I can’t ignore them any longer. There are times when I feel like I simply can’t get out of bed. Times when negativity is the easiest route to take. Times when finding the next drink seems like the right thing to do.”

He added, “Admitting that I need therapy to address work and life related issues might be one of the hardest things I’ve ever had to do … but it’s necessary.”

By going public, Ryle said, “I hope I can be a brick in the long road toward ending the stigma about discussing mental health issues. For guys out there who might be afraid that they’re alone with how they feel. You are not alone.”

Ryle was a sports MMJ in Anchorage, Alaska for a year, and then spent three years at WDTN in Dayton before arriving at WCPO in June 2017.

He has received supportive tweets from many colleagues, as well as Scripps CEO Adam Symson, who applauded Ryle’s “courageous move to take time away for self care. Even more courageous and honorable to share it with others so that we may be inspired by you. Be well.”

Ryle’s response: “All I can hope is for conversations to take place where they’re needed, and for folks to be more open with how they’re doing. Adam, thank you so much for reaching out. I’m very fortunate to work for an employer that allows me the chance to focus on my mental health.”

Until now, said Ryle, “My life has been consumed by telling the stories of others. Now it’s time for me to turn the page on a new chapter of my story with the hope that the next month might bring a bit of clarity.”

I’ve been thinking about how to address this issue for a few weeks. Always waiting for, “the right time”.

There’s no time like right now. Every minute matters.

You won’t see me on TV for a few weeks. I’m still here. Ready to break down the stigma of discussing mental health. pic.twitter.com/fAVHmEBu6O