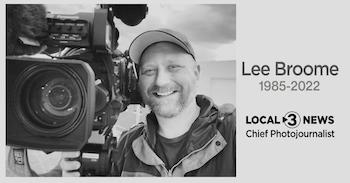 Broome joined the NBC affiliate right out of the Red Bank High School in Chattanooga. He worked there for nearly 18 years. The station called him a “bright light in local journalism who will never be dimmed.”

“Lee Broome’s personality came through on both sides of the camera. As a friend and co-worker, Lee was the one who laughed the loudest—and loved life the most,” anchor David Carroll wrote in a tribute on the station’s website. “We learned a lot from Lee Broome. He inspired us with his passion for living, his quest to tell the best stories, and his ever-present smile. He leaves behind many good friends and a legacy of great video. He will always be a part of Local 3 News.”

Lee was a perfectionist. He took pride in the little things. The right shot, the best lighting, and making people feel comfortable on camera. It’s no wonder he consistently won journalism’s top honors, from the Associated Press, and the Radio Television News Directors Edward R. Murrow Awards. Reporters knew that with Lee shooting and editing their video, their story would be presented in the best possible way.

In his obituary, the Chattanooga Times Free Press said Broome is survived by his partner of nineteen years, Cody Phillips. His father, Vernon LeRoy Broome III his brother, Gary, along with his niece, Emersyn, nephew Christopher and best friend John Collins.