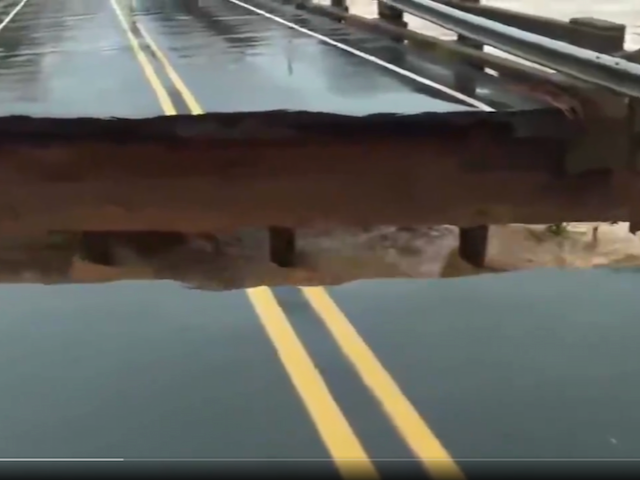 Charlotte reporter Amber Roberts and her camera crew had a close call this morning when part of a bridge they were filming on abruptly collapsed.

Roberts, a morning reporter with WJZY, was reporting from a bridge to show viewers the flooding that had occurred in Alexander County, N.C. She was standing on the bridge with her photographer when a portion of the road washed away on live television just feet away from where she was standing.

“This is incredibly scary!” Roberts shouts as the portion of the bridge disappears into the rushing waters below her.

Roberts and her photographer slowly backed off the bridge and got to safe ground, but Roberts kept her composure and continued to report live.

“Just right here live on TV, we saw the road collapse—the same road that we were just standing on seconds ago,” she said. “So thank God that we are backing up.”

According to the station, Roberts and her photographer are OK.

You can watch the dramatic video, which has more than 46,000 views, below.

Reporter @AmberFOX46 almost had a bridge collapse underneath her while reporting live in Alexander County, North Carolina.pic.twitter.com/wby3doPYMO