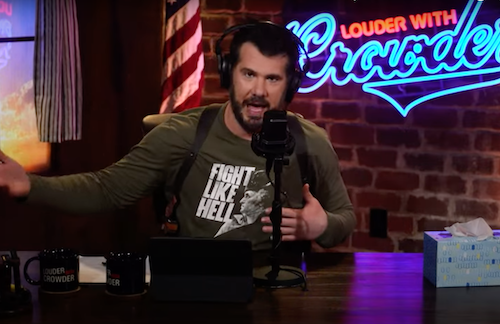 On yesterday’s YouTube show, Louder with Crowder, conservative show host Steven Crowder said Yu had “an aggressively Asian face” after playing a clip of Yu’s story about the closure of San Francisco’s only In-N-Out location because it wouldn’t check customers’ vaccination status.

The derogatory remark sparked a round of anti-Asian comments and racism from the show’s panelists. You can read the text of their remarks at the end of the article.

In response, CBS called the comments “horrific” and “racist,” and said Crowder’s comments reaffirm the need for journalists to call out anti-Asian violence and hate speech.

“CBS Television Stations and KPIX 5 fully support our colleague Betty Yu and condemn the horrific, racist comments directed at Betty as well as the other demeaning Asian stereotypes spread during Steven Crowder’s program on Wednesday,” said CBS Television Stations president Jennifer Mitchell and KPIX president and gm Kevin Walsh. “We stand in solidarity with Betty, an accomplished journalist and valued member of our CBS family. These hateful and offensive remarks are outrageous and destructive and reaffirm the importance of our work as journalists to shine a light on anti-Asian violence and hate speech when it occurs.”

Media Matters transcribed the Crowder segment, which we have included below.

STEVEN CROWDER (HOST): San Francisco In-N-Out, they’ve been in a battle with the city over – let me just let them tell you the story, vaccine requirements.

CROWDER: Oh, that is an aggressively Asian face.

CROWDER: It is a — I mean that just means if you were a skier it would be like a black diamond you’d have to drop in on a chopper.

CROWDER: By the way, the reason I say that is because usually with the reporters, they’re, like, they’re kind of like Americanized Asians. So I think it’s a good thing.

LANDAU: I wish she would have kept her fan.