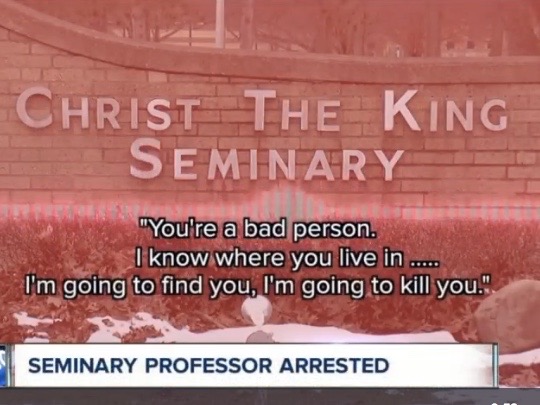 A professor at a Seminary in western New York has been arrested for stalking a local TV news reporter.

WKBW investigative reporter Charlie Specht has been identified as the target. The suspect is Paul E. Lubienecki an adjunct professor at the Christ the King Seminary in East Aurora, New York.

According to the Buffalo News, prosecutors claim Lubienecki used intimidation, including death threats, against Specht who was investigating the Buffalo Catholic Diocese.

“We were shocked, surprised and scared,” Specht said in a story on WKBW’s website. “I got the feeling that this one person–whoever they were–had spent months harassing me about really personal things, and was now threatening violence. I wanted my family to be safe. We put our trust in law enforcement to find out who was doing this.”

Specht has won state and national awards for his investigations into the diocese sex scandal.

The 150-year-old Seminary educates future priests, deacons and lay ministers. In a statement it says “Lubienecki’s affiliation with Christ the King Seminary as an adjunct continuing education professor has been suspended until this matter is resolved.”