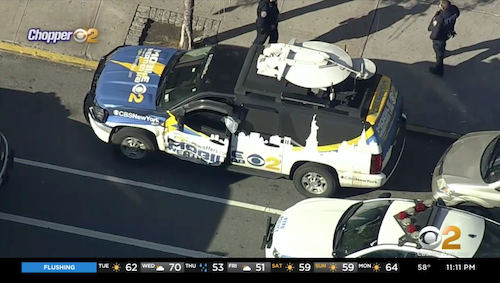 A 24-year-old man has been arrested for stealing a WCBS news car from Midtown Manhattan and driving it to the Bronx.

Christopher Noesi is being charged with grand larceny after the New York CBS-owned station says its vehicle was stolen Tuesday afternoon.

The station says its news crew was working on a story at 50th Street between 9th and 10th Avenues in Manhattan when the vehicle was stolen. Surveillance video shows a man talking to a station photographer and pretending to leave, then circling back, hopping in the car and driving away.

The driver of the stolen vehicle hit a taxi during the escape, but no one was injured.

Police say they found the SUV near the suspect’s home.