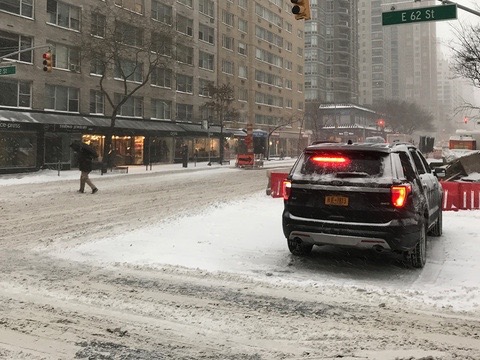 The Bomb Cyclone has landed in New York City and all major stations have reporters covering the storm throughout the day.

All stations began coverage early this morning. WABC, WNBC, WPIX, WNYW, WCBS and NY1 has all hands on deck in studion and in the field.

PIX 11, the Tribune station, has been live since 4a.m. They plan to stay live throughout the day with reporters covering the Tri-State area.

NY1 will be providing live updates on air and online all day and will use the hashtag #NY1Snow to gather viewer photos.

WNBC was live from 4a.m to 7a.m. and began rolling coverage at 7:57a.m. The NBC owner station had nine reporters covering the story from the field.

WNYW, the Fox owned station, began coverage at 4:30a.m starting with Sukanya Krishnan and Kerry Drew. Rosanna Scotto and Lori Stokes took over at 7a.m. and continued until 11a.m. when Ernie Anastos and Allison Morris took over. The station plans to stay live until the conditions settle down.