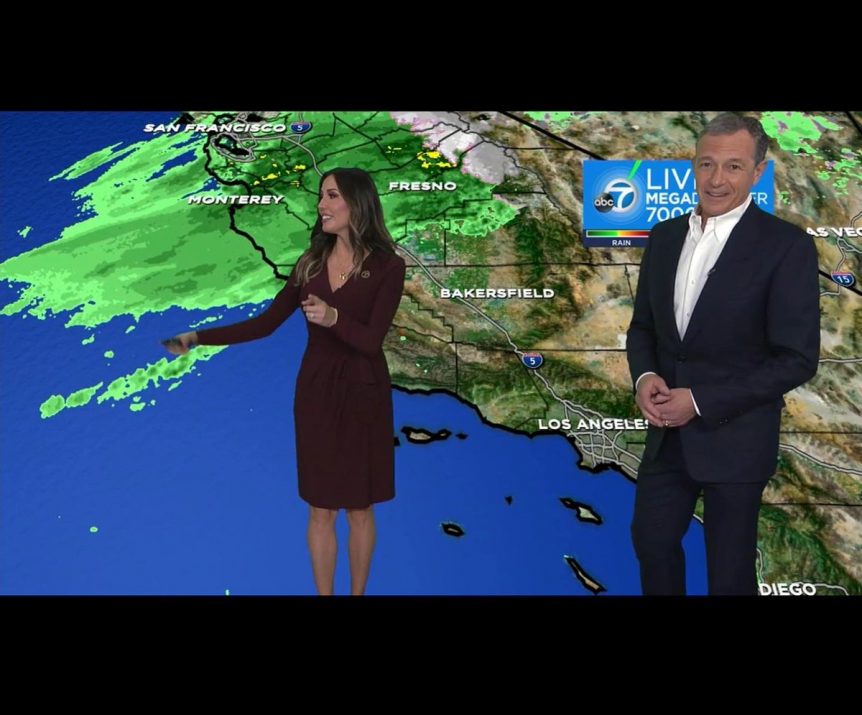 During the interview, KABC meteorologist Leslie Lopez asked Iger to join her at the weather board. Iger, who began his career in broadcast journalism, agreed, but added: “I have not done the weather in 48 years.”

Lopez let Iger report the weather himself after getting him situated in front of the weather board.

“You can see there is light rain falling across the Southland this morning, expected to get just a little bit heavier as the day progresses,” Iger said to start. “However, this is just a prelude to a big storm that should be coming through the Southland Monday and into Tuesday morning.”

He breezed through the rest of the forecast like a seasoned pro—although he did check his off-screen monitors.

Afterwards, Iger told Lopez he started his career as a weatherman when he was 23 years old. “The possibility exists that you could become the CEO of The Walt Disney Company!” he told Lopez.

Iger stepped down as CEO of Disney in February 2020 and he will remain executive chairman through the end of this year. He said he was looking forward to what comes next for him, “although I’m not 100% sure what that is,” he said. “But I haven’t had a day off since the eighth grade.”

“I’m often asked: Would I change anything? The answer’s no. It worked out just fine,” said Iger. “I’ve had just a great experience over 47 years with ABC and Disney. I’ve loved what I’ve done, every day that I’ve come to work I’ve been happy. I’m privileged to have had the opportunity to run this great company.”

Iger shared pictures from the broadcast on Twitter. “Decided to try out being a weatherman again, with KABC’s #lesliesykes and @abc7leslielopez,” he wrote. “Totally fun!”