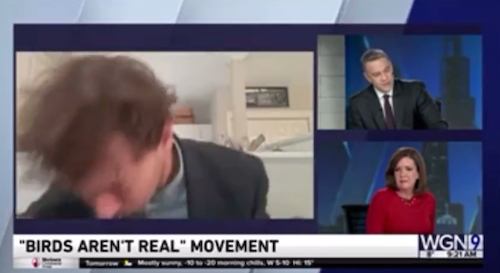 The founder of the Birds Aren’t Real conspiracy, Peter McIndoe, appeared to prank the morning news team at WGN.

The WGN morning news team, which is no stranger to wacky and odd, had McIndoe on to explain his theory that birds are really drones the government uses to spy on us.

McIndoe was talking to Larry Potash live on-air when he took a drink of something, then had to stop the interview and seemingly vomit while live.

After struggling to figure out what happened, Potash wrapped the segment by telling weatherman Paul Konrad, “It’s not easy to be on TV Paul, you know. Some people, it gets them nervous and I just hope that young man is OK.”

Below is an excerpt from the New York Times story about the movement:

What Birds Aren’t Real truly is, they say, is a parody social movement with a purpose. In a post-truth world dominated by online conspiracy theories, young people have coalesced around the effort to thumb their nose at, fight and poke fun at misinformation. It’s Gen Z’s attempt to upend the rabbit hole with absurdism.