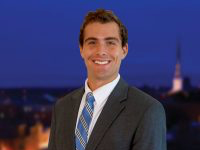 A Bangor, Maine, sports anchor says he’s in broadcasting because of concussions.

Before WVII‘s Dave Peck was a sports anchor, he was a college athlete.

He was a wide receiver at Bowdoin College when a concussion ended his freshman year run. He then played baseball and suffered another concussion in the summer of 2015. He told a local paper he didn’t feel normal again until April 2017, almost two years later.

“When my playing days were over, I knew I wanted to get involved in sports media,” Peck said.

Originally, Peck was studying theater and history at Bowdoin. After his injuries, he transferred to sports media. He started in radio and later did play-by-play and was a sideline reporter for the New England College Baseball League.

He’s now reporting in Bangor and started this August, just days before receiving his degree from Northwestern University