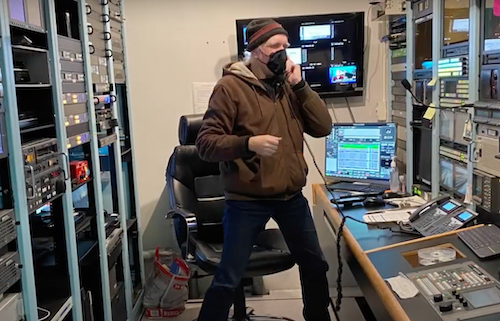 The staff at KTBC, the Fox-owned station in Austin, Texas, are showing the challenges they are facing both on-air and behind the scenes while covering the extreme winter weather in the state last week.

In the video, which featured a compilation of the station’s coverage as well as some behind-the-scenes clips, meteorologists Chelsea Andrews and Zack Shields talk about the packaged meals ready-to-eat, or MREs, that the station had on hand, while engineer Kelvin Benson spoke of power issues that affected the station’s ability to report the news.

KTBC svp and gm Michael Lewis told TVSpy it was likely the first time many of the station’s employees had been affected by a story they were covering. Lewis says most of the staff had no power, no water and a dwindling supply of food.

The station went through 12 cases of MREs and over 20 cases of bottled water, he said.

“Please remember, our news team provided this service to the public while they worried about their own homes and the well-being of their own families,” Lewis said. “Despite the deteriorating situation inside and outside of the facility, we managed to produce nine hours of news per day; produced five-minute news updates every 30 minutes between newscasts and carried three live press conferences daily on-air and on social media. In between newscasts, our news teams shared the latest information on social media by the minute.”

Watch the entire video below.