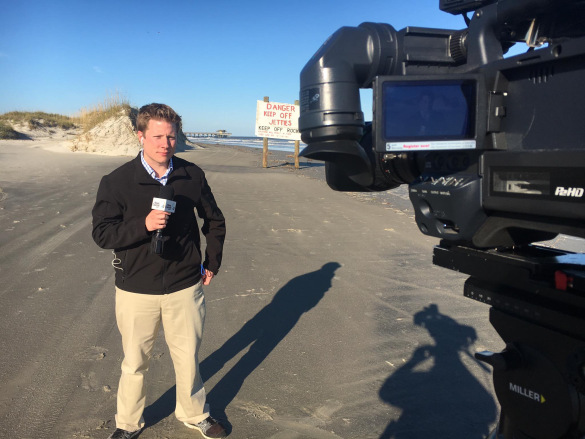 Michael Miller is a weekend anchor-reporter at WJBF in Augusta, Georgia. In 2014, he made it to TVSpy when he was arrested for disorderly conduct which involved an off-duty deputy.

Miller’s case was eventually dismissed and his record was cleared. He got suspended from work but eventually went back. Earlier this week he posted a blog on his website called “Friday, December 12th, 2014: A Date I Will Never Forget,” and disclosed his side of the story from that night that he calls life changing.

Friday, December 12th, 2014. That night was the annual WJBF/WAGT Christmas Party. I was on vacation that entire week, so before I went to the event, I spent some time with friends. What did we do? We ate lunch and had a few alcoholic beverages.

He continued to say:

I believe the Christmas Party got started around 7:00 p.m. that night. When I showed up, I already had a few drinks in my system. For the next few hours, I drank more. And more. And then some. It was a Christmas Party. A celebration, of course.

The event had an open bar with beer and wine. I was drinking white wine that night. And oh yeah, the party had plenty of food… but I forgot to have any of it. I was too busy talking with co-workers and my friends. The lack of food that night was ultimately the thing that put me over the limit, but I didn’t know that at the time.

Miller explains that after the Christmas party him and friends from the station landed at a bar called the Country Club. There, he stopped drinking and decided to head home when an deputy who was in uniform but working a private event, flagged him down near the bathroom and told Miller he was being kicked out.

I was approached by Deputy Barry Davis, Jr. of the Richmond County Sheriff’s Office. Davis told me that I was being kicked out of The Country Club, so I questioned him about it. “Why am I being kicked out? I don’t understand. I didn’t do anything.”

The deputy then grabbed me and started bringing me toward the exit to get me out of the club. Unfortunately, the area where this was happening was not near the group of friends and co-workers I was hanging out with. Only two friends saw the incident unfold.

Despite initial reports, Miller says he did not attempt to grab Davis’ taser even though he was hurt during the arrest. Miller included photos of his bruises. He was arrested, booked, suspended and sent to therapy. He says the experience helped him mature both on and off air.

Davis was ultimately demoted from deputy and left the Richmond Country Sheriff’s Office. He was also arrested and charged with battery in an unrelated case