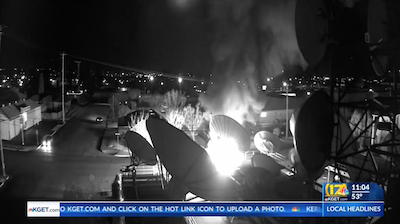 Bakersfield police have arrested a woman suspected of starting a fire in front of Bakersfield, Calif., NBC affiliate KGET on Sunday night.

Police say Amber Hernandez of Bakersfield has been arrested for attempted arson of an inhabited building after they found an abandoned vehicle in flames in front of the station.

The station says the fire forced the evacuation of its staff and the cancellation of the 11 p.m. newscast.

No one was injured. Station’s staffers also said they saw 13 wooden crosses about 5 to 7 feet tall outside the gates of the station. Two of them were draped with what appeared to be wedding dresses, a third with a man’s suit jacket.