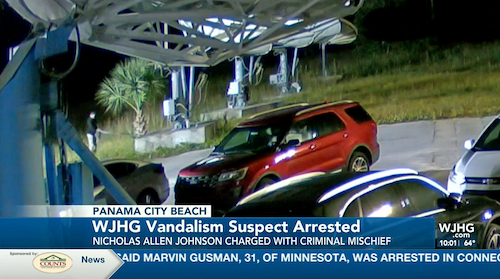 Police have arrested a man they suspect of cutting cables to nine satellite dishes at WJHG in Panama City, Fla.

Nicholas Allen Johnson, 51, of Panama City Beach, has been charged with criminal mischief after police say he knocked the NBC affiliate and its 8 networks off the air on Sunday night.

Bay County Sheriff Tommy Ford told WJHG that evidence was found on Johnson linking him directly to the vandalism. Ford said the suspect could be facing “serious” federal charges.

“It’s extremely important this situation is resolved,” said WJHG’s General Manager Ulysses Carlini. “It puts this matter to rest. We are not wondering if this individual is wandering around looking for a new target.”

Carlini said many of the satellite dishes were repaired “in a temporary way” to get the station back on the air but that more fixes are needed.

“We are a long way from being 100 percent repaired,” he said.