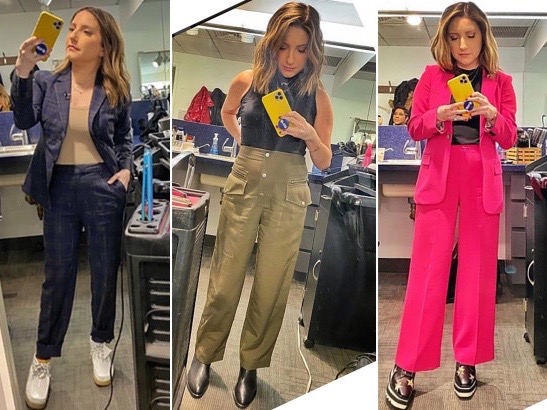 For NY1 traffic anchor Jamie Stelter, returning after having baby No. 2 meant more than going back to her morning shift.

She decided it was time to revamp her look. And that meant more high-fashion pants suits and throwing away the out of date “anchor” dresses that have been so popular for so long.

Now as part of her #TVTrousers initiative, Stelter is making a push for more news anchors to find their own style on air rather than sticking to old, out of date fashion advice.

The splashy look kicked off Stelter’s #TVTrousers initiative, with her “wish” that “the TV dress dies a slow painful death,” as she writes in an Instagram post to her 15,000 followers.

“It just felt to me like it was outdated,” Stelter tells The Post of the ubiquitous garment in question: The slim-fit sheath in bright jewel tones such as teal, purple or magenta, worn by nearly every female news anchor because it pops on camera.

For a long time Stelter said she struggled to find clothes that were TV appropriate and reflected her spunky personality. Before giving birth to her second child, she said she tried baggier dresses to give her look an edge but it didn’t translate on camera.

“[It’s] taking back a little of the power and feeling like I don’t have to wear the dress that everyone thinks I should wear,” she says. “We can wear a suit, too. We can wear pants, too. And that’s OK! Not only is that OK, but it’s celebrated.”

KGW anchor Maggie Vespa was slammed for wearing high-waisted pants on television last year, as TVSpy previously reported. She taped a response to viewers who didn’t like her look and it went viral.