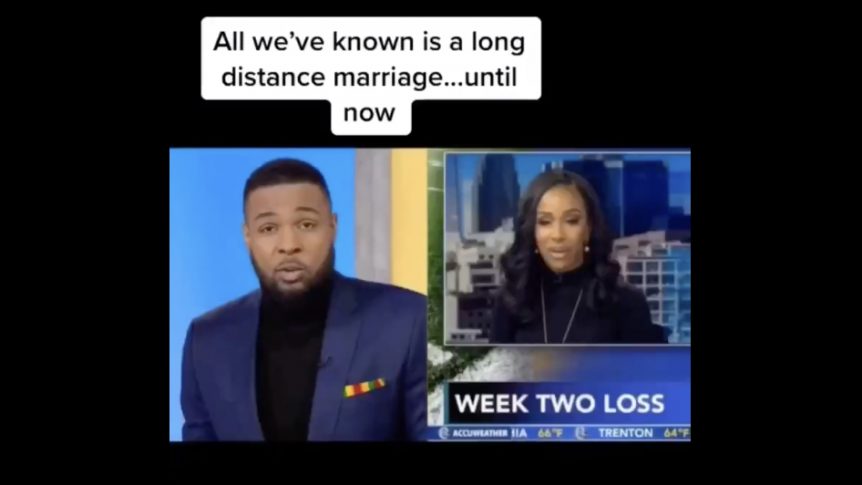 Now, the married news couple has released another TikTok, chronicling their relationship and celebrating that they will once again be working in the same city.

“We met the summer of 2012 in Little Rock, Arkansas, as we were both starting out our careers in journalism,” Reyes wrote in the first slide. The photo behind the text shows them both posing on an anchor desk.

The video follows their evolution to best friends, then boyfriend-girlfriend.

Like any news couple, it wasn’t long before Reyes and Burton landed jobs in different markets, which forced them to be apart. Reyes got a job in D.C. while Burton stayed in Arkansas. But six months later, he ended up at her station.

However, two months before their wedding, she got an anchor job in Philadelphia, where she would stay for four-and-a-half years.

“He fully supported me in pursuing my dreams. All we’ve known is a long distance marriage until now,” wrote Reyes, who recently announced she was leaving WPVI to be with her husband in Washington, D.C.

“We’re finally back together again. Starting 12/7, we will work in the same city, at competing stations, going head-to-head in the same slot.”

What we have isn’t perfect but it’s always been worth fighting for. Get you someone who will support you and your dreams…and isn’t afraid of a little competition…cuz ya girl wants all the smoke 😌 #5moredays ⁣ pic.twitter.com/3m0drxjDqk