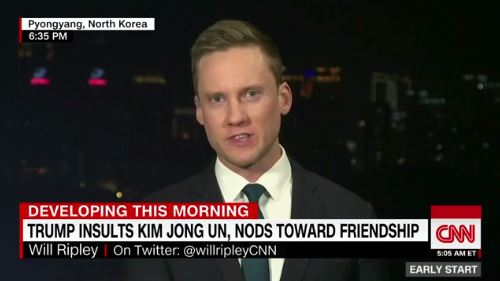 CNN’s Will Ripley departed North Korea earlier this evening, but there’s a good chance he’ll be back soon. The Tokyo-based correspondent wrapped up his 17th trip to the DPRK to supplement CNN’s coverage of Pres. Trump’s trip to Asia.

“The message that was very clear,” Ripley says about this reporting trip. “They are determined as a nation to finalize their nuclear program, which means nuclear tests and missile launches. They say it will happen at a time and place of their choosing.

Which means Ripley, who’s been with CNN since 2014, is already planning his 18th trip. We caught up with him before he departed Tuesday morning.

TVNewser: You’re finishing up your 17th trip to North Korea, what’s your biggest takeaway this time?

Will Ripley: I think my biggest takeaway this time is that the level of trust toward the United States – even though it was pretty low to begin with – has reached, in my opinion, new lows. The North Korean officials that we speak with didn’t even entertain the idea of a friendship with President Trump after he made those statements in Vietnam over the weekend. They’ve listened to the rhetoric, they’ve listened to the threats, they watch naval exercises and joint military exercises and they feel that it may not even be possible for North Korea to work with the current administration.

Today a North Korean soldier tried to defect by running across the border and was shot. How often does something like this happen, and what happens next in a situation like this?

Soldiers do defect occasionally. I can recall at least one other time this year while I was here in the country when a soldier crossed into South Korea at the demilitarized zone. It’s obviously never reported here in North Korea, so people – aside from those directly involved – won’t hear about it. As for the soldiers’ family, we just don’t know. Soldiers tend to be younger and unmarried if they’re in the midst of their 10-year conscription, so he probably didn’t have a wife or children. As for his parents or any brothers or sisters, we don’t know what would happen to those people. We’ve met the families of other defectors including North Korea’s highest-profiled defector, Thae Yong Ho, and his family insisted that they were being treated well despite him committing what is considered one of the most serious crimes against the society by violating the society of leaving.

On social media you are open about your reporting and observations, but how is that kind of reporting monitored by North Korea? Even this communication I’m having with you now, could it have been intercepted by North Korean monitors?

We’re up before dawn doing live reports, and then we’re in meetings with North Korean officials, then we’re out on the streets shooting a story, coming back, writing a story, editing the story and then more live reports late into the evening. We’re getting maybe two to three hours of sleep every night. And yes, I assume that North Korean monitors are listening to this.

In a statement lashing out at Trump on Saturday, North Korea also referred to him as a “dotard,” a word meaning a very old person, and one the reclusive nation has used on him in the past. @willripleyCNN reports. https://t.co/bmQRHl9Clm

When you have reporting trips like this, for nearly two weeks at a time, how do you decompress, or do you prefer to get right back to work on another story, in another country?

It’s definitely important to decompress after North Korea. Usually, I try to unplug completely – no social media, get away from work and relax. It’s not always possible depending on what’s happening with the news. There have been some trips where I leave the country and then the very next day there was a nuclear test or a missile launch right after I leave, and then of course it’s back to the live wheel. But if at all possible, I really do need to unplug after leaving here because it is a physically and also mentally exhausting place to work.

Do you have a favorite restaurant or local destination when you’re reporting from Pyongyang?

They recently opened a new pizza place, and I go there because the pizza is pretty good, but the entertainment is very good. There’s this one restaurant manager who is also a singer, and she performs a lot of beautiful Korean songs but she also sometimes surprises us by throwing in Western songs. When we had lunch there the other day, she sang Elton John’s ‘Can You Feel the Love Tonight’ and also ‘Beauty and the Beast.’ When I posted a video of her on Instagram, people really responded to it! It’s mostly locals in the crowd listening – except for us – but they did applaud at those western songs. I always enjoy those little moments in North Korea that remind me at the end of the day we all seek the same things in life: happiness, better living standard and we can all appreciate a good song.