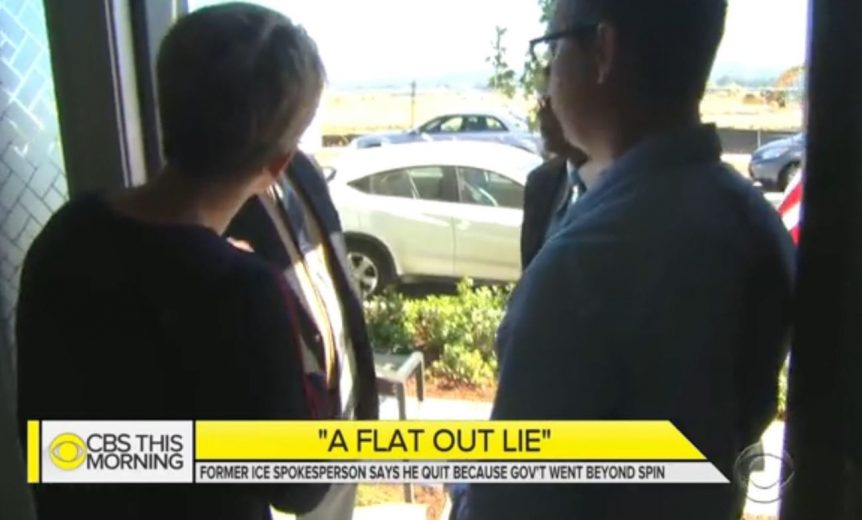 When CBS News correspondent Jamie Yuccas first heard the knock at the door Wednesday as she was conducting an interview she “assumed it was UPS.”

Yuccas was interviewing former Immigration and Customs Enforcement spokesperson James Schwab who quit his job in March. Schwab, who is a U.S. Army veteran, and who has worked for other government agencies in PR roles, admits he has spun information to reporters in the past. But when he says he was asked to lie about an incident involving the mayor of Oakland, he decided to resign in protest.

Yuccas pursued his story, which included a sit-down at Schwab’s home Wednesday.

“At first it was just a knock at the door,” Yuccas told TVNewser, recalling the incident. “The knocks got louder as [Schwab’s] family member went down the stairs.”

Yuccas stopped her interview with Schwab, and heard someone say “security.”

“I looked at my producer and said, ‘security?’ My producer said, ‘I think he said Homeland Security.'”

Schwab got up, unplugged his microphone and went to the door. “He asked them a couple times what this was about,” Yucas told us. “They finally said, ‘about the leak.’ Schwab then asked, ‘what leak?’ “The leak with [Oakland Mayor] Libby Schaff,” Yuccas recalls the agent saying.

“That’s when I approached with my photographer and started asking questions,” Yuccas said.

“The Homeland Security agent who spoke seemed agitated when he saw me and very agitated seeing our camera,” she said. “It was unclear to me if he knew we were there or not.”

But Yuccas said Schwab is almost certain the DHS agents knew a news crew was there. “He was in contact with other media outlets and was going to be sharing his story with others after us,” she said.

After the agents left, Yuccas continued the interview and asked Schwab point blank if he had leaked anything to the Oakland Mayor. He didn’t, he said. He added that the mid-interview visit by the agents was “absolutely” an intimidation technique.